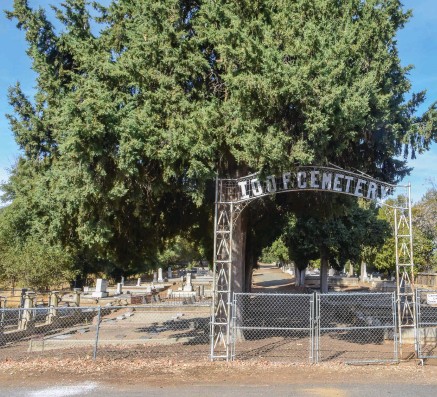 They sit quietly on the edges of the historic Gold Rush towns that dot the Sierra. Some lovingly maintained, a place of reverence and retrospect. Others forgotten and in disrepair, the names within them long forgotten. We see the stones and take them for granted. They have been there for decades and will be there for many, many more. But will they? Vandalism to historic cemeteries is unfortunately nothing new. An ongoing epidemic of the destruction of these vulnerable locations are evident everywhere you go if you look hard enough. Toppled stones, crypts desecrated, graffiti plastered on every possible surface. The aftermath is devastating, and on the late afternoon of Jan. 28, 2011, Sonora would experience this destruction on a level that was almost inconceivable. The Independent Order of Oddfellows (IOOF) Lodge #10’s cemetery had been sitting up on the hill overlooking Sonora since 1856. In its tidy rows and plots lie the final resting places of much of the town’s history. The miners and the businessmen. The famous and the infamous. Those who lived long full lives and those who would die too soon. Elaborate monuments and simple stones, all carrying the names of someone loved and lost. A victim of time, weather, and previous vandals, the little cemetery had just been lovingly restored by Lodge members and once again stood proud and somber on the hill. It was just before 5 p.m. on that January afternoon when the call came into the Sonora Police Department from a resident near the cemetery. The caller reported that a male subject was inside and damaging the stones. Armed with a detailed description of the subject police rushed to the site, but by the time they arrived the culprit had vanished and what had been left behind would shock the entire community. Thanks to the excellent descriptions and prompt action provided by two eyewitnesses, the person responsible for this crime was arrested, brought to trial and ultimately convicted. But it was far from over. The damage was so extensive it was hard to believe it had been done by a single person. Nearly 40 large marble and granite monuments, each weighing several hundred pounds, were knocked over and smashed. Some even lifted and tossed to different locations in the cemetery. Cement and marble slabs broken into pieces. It was heartbreaking on so many levels. The senseless destruction of the property itself, and the utter disrespect to the souls who rested there. The Lodge and its handful of active members were faced with a painful reality. The estimated $80,000 in damages and the monumental task of the clean-up and trying to piece together damaged stones and plots would not be easy. In fact, could it be done at all? When the news fully hit the town and after the initial shock wore off, the reaction was swift and determined. The little cemetery on the hill would not be lost and help was on the way. Skilled craftsmen, history lovers, sympathetic citizens, and friends and families of the Lodge members would come offering their time, talents and strong backs in some cases. It would not be easy. It would not happen overnight. But it could and would be saved. Today this small piece of hallowed ground with its faint but still visible scars of that awful January day is peaceful and lovely once again, as it should always be. While this story had a happy ending, many more will not. Vandalism to these sacred and extremely important locations are happening daily. Abandoned and forgotten sites are the most vulnerable, but as you can see it happens to even active cemeteries in populated areas. And vandals are not the only threat they face. Apathy and neglect will see many slowly fade away, and with each headstone lost the precious information etched onto their faces goes with them. These remnants of the past are more than just a final resting place of forgotten names and faces. Each cemetery is a history book and each headstone a chapter with its own story to tell, and once gone they are quickly forgotten. There are many ways to save these treasures before it’s too late. Community awareness is key and planned volunteer clean-ups can involve local organizations and schools. Adopting a grave or plot is becoming more popular and gives people a chance to make an emotional connection in the research and care of their chosen subject. Education is another tool as children sometimes have a disconnect as to realizing that this is not just a field of rocks with scribbled words to play on, but the sacred location of real people and that there is an expected level of respect to be shown. How can they know if they are not taught? And please, observe and report any suspicious activity because prevention is much easier than repair. With awareness, education and care, these cemeteries can survive to tell their tales to future generations who will walk the stone lined paths, softly read a name that has not been spoken aloud in countless years, and in that moment the forgotten are remembered. Billie Lyons is curator of the Tuolumne County Museum *This story is dedicated to the memory of Denine Urquhart, whose love and dedication to the IOOF Cemetery in the above story was so very evident in the hard work she put into the care of the gravesites, and in the beautifully written tributes of those who rest there. She is now at peace and sleeping in the place she held so dear, and the little cemetery on the hill has its very own resident angel watching over it.