Woodcarvers create their own community through craft

Weekly wood carving class at the Tuolumne County Senior Center brings out the pros, the hobbyists and the newbies 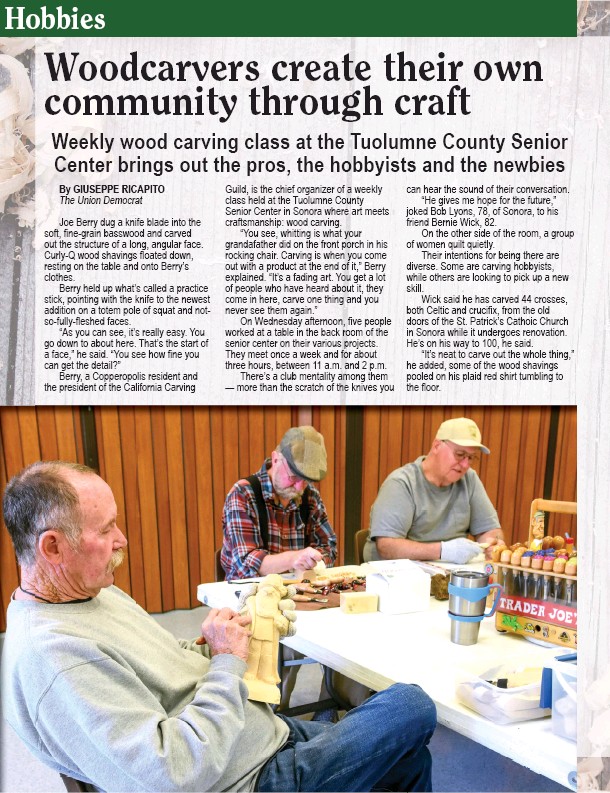 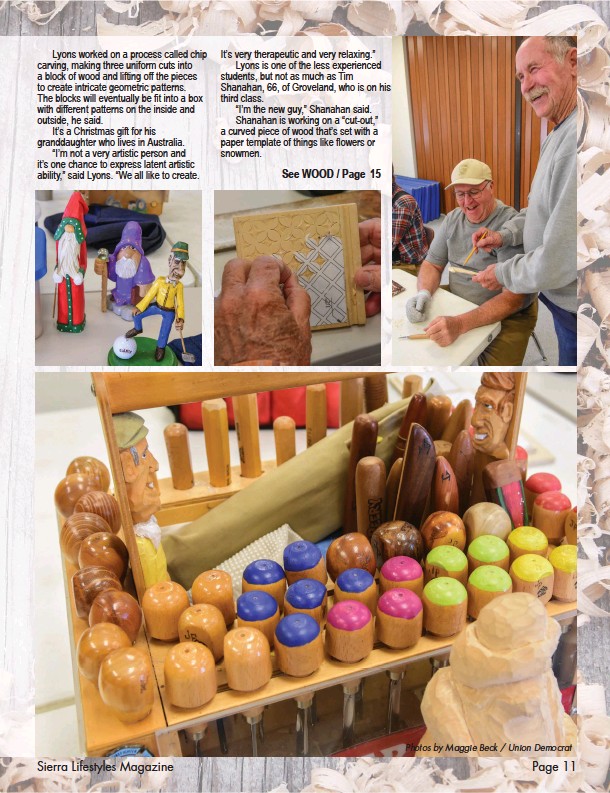 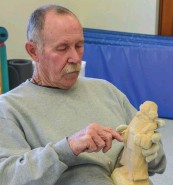 Joe Berry dug a knife blade into the soft, fine-grain basswood and carved out the structure of a long, angular face. Curly-Q wood shavings floated down, resting on the table and onto Berry’s clothes. Berry held up what’s called a practice stick, pointing with the knife to the newest addition on a totem pole of squat and notso-fully-fleshed faces. “As you can see, it’s really easy. You go down to about here. That’s the start of a face,” he said. “You see how fine you can get the detail?” Berry, a Copperopolis resident and the president of the California Carving Guild, is the chief organizer of a weekly class held at the Tuolumne County Senior Center in Sonora where art meets craftsmanship: wood carving. “You see, whitting is what your grandafather did on the front porch in his rocking chair. Carving is when you come out with a product at the end of it,” Berry explained. “It’s a fading art. You get a lot of people who have heard about it, they come in here, carve one thing and you never see them again.” On Wednesday afternoon, five people worked at a table in the back room of the senior center on their various projects. They meet once a week and for about three hours, between 11 a.m. and 2 p.m. There’s a club mentality among them — more than the scratch of the knives you can hear the sound of their conversation. “He gives me hope for the future,” joked Bob Lyons, 78, of Sonora, to his friend Bernie Wick, 82. On the other side of the room, a group of women quilt quietly. Their intentions for being there are diverse. Some are carving hobbyists, while others are looking to pick up a new skill. Wick said he has carved 44 crosses, both Celtic and crucifix, from the old doors of the St. Patrick’s Cathoic Church in Sonora while it undergoes renovation. He’s on his way to 100, he said. “It’s neat to carve out the whole thing,” he added, some of the wood shavings pooled on his plaid red shirt tumbling to the floor. Lyons worked on a process called chip carving, making three uniform cuts into a block of wood and lifting off the pieces to create intricate geometric patterns. The blocks will eventually be fit into a box with different patterns on the inside and outside, he said. It’s a Christmas gift for his granddaughter who lives in Australia. “I’m not a very artistic person and it’s one chance to express latent artistic ability,” said Lyons. “We all like to create. It’s very therapeutic and very relaxing.” Lyons is one of the less experienced students, but not as much as Tim Shanahan, 66, of Groveland, who is on his third class. “I’m the new guy,” Shanahan said. Shanahan is working on a “cut-out,” a curved piece of wood that’s set with a paper template of things like flowers or snowmen. Shanahan is working on carving an eagle. “It’s a different aspect of what I did before, but I don’t know if it’s more artistic or not,” said Shanahan, a former woodworker for cabinets, houses and remodeled kitchens. Berry, a retired fireman from Riverside County, said most of the group members hope to get more interest in the woodcarving group and attract other seniors and adults who might join them for the weekly hobby. “I started 20-something years ago and enjoyed it and stuff, but in order to keep this going, we’re in the toughest position in the world. It’s hard for people to sit down and do this. They’re doing things with the iPhone and this is time consuming,” Berry said. Berry said the group has met at the senior center since 2000, methodically getting through projects and starting new ones as members have come and gone. “We decided the only way we would get anybody else is doing it here,” he said. Frans Vegder, 66, of Sonora, is working on a Dutch-style wooden shoe he plans to paint red, white and blue. It’s an homage to the Dutch flag, where he lived until 2000 before moving to Sonora with his wife. Vegder, a former English and computer science teacher in Holland, said the project will likely take him about a month to complete. “I’ve done all kinds of things, wood carving is just one of them,” he said. “It’s relaxing, it generally comes out nicely.” Berry said most of the people at the meeting tended to catch on quick. But for newbies, he always explained the basics. The direction of the grain should direct the knife. There were tools available to learners, like a gouge, a bevel and a chisel. Some people worked on relief carving, which makes a 3-D effect on a 2-D sheet of wood, while others worked from a “rough-out” which is a pre-cut template shape to carve details into. “I try to teach them safety and get them on their way into doing it themselves,” Berry said. Basswood was the wood of choice because of its fine grain and it had very little knots. But the basswood — taken from a bushy tree called a Linden, common on the east coast — was harder to come by these days since Orchard Supply Hardware closed because it was the only store in town that sold it. Berry said they get blocks out of town now and some others use butternut, which is soft, but tends to splinter. “Once you sit down, it becomes contagious to a lot of people. You’re creating something. I can’t draw and I can’t take clay and make it look like that,” Berry said, pointing to a wizardly Santa figure painted red and green. “But I can take wood from around wood and make it look like something.”