By GIUSEPPE RICAPITO The Union Democrat 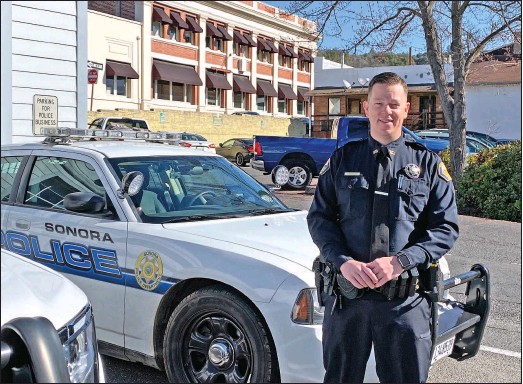 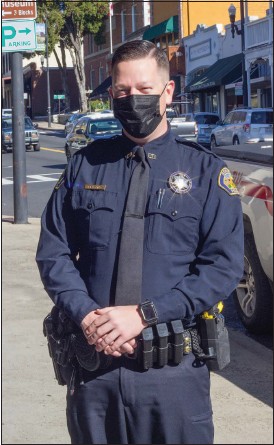 The COVID-19 pandemic opened up law enforcement officers to even more risks than they would generally experience while working out in the public and responding to emergency calls, said Sonora Police Officer Thomas Brickley. “When we took the oath of office, we understood the inherent risk of the job. The car crashes, the potential of being wounded in the line of duty, we understood that,” he said. “What we did not expect was the pandemic. We were potentially exposing our family members and our loved ones. That was kind of a new twist for a lot of us.” Brickley, 30, has lived in Tuolumne County his entire life. He graduated from Summerville High School in 2009, attended Columbia College and Delta College, and joined Tuolumne County Ambulance before becoming a Sonora police officer about two years ago. Brickley had about a year on the job before the pandemic took hold, but much of his policing career has now been defined by it. “We don't have a handbook for policing during the pandemic,” he said. Even when a statewide shutdown hit in March 2020, policing in Sonora never skipped a beat. Instead, the officers were forced to change their contact practices to protect themselves and their families when there was much more uncertainty about the spread and danger of the virus. “It just comes down to, emergencies don't stop during a pandemic. Crimes still occur,” Brickley said. “Even during a pandemic, we have to make sure we're out there and making our community safe.” Brickley is primarily designated as a patrol officer, meaning he responds to emergency calls for service or reports of potential crimes. “When someone calls the police department or 911, we're here to respond for whatever that may be,” he said. Brickley said the police department set policies that have remained in place throughout the pandemic. They wear protective equipment such as gloves, masks and eyewear, and will often opt to conduct interviews over the phone rather than in person. If they must meet in person, they will often choose to do so outside, Brickley said. In the beginning of the pandemic, the police also avoided making traffic stops for vehicle infractions such as a broken headlight. Still, there is no “constant contact” as there was before the pandemic, though Brickley and other officers hope to maintain community contact so that the public is comfortable asking them for help or expressing concerns. “There's still a much larger safety concern,” he said, “but what really impacted us was not being able to get out and conversing with the public.” At the beginning of the pandemic, some of the concern over the virus spread to the community. “In the very, very beginning, when we went into lockdown, our calls for service decreased. That only went on for a week or two,” Brickley said. When the first stay-at-home order was lifted, the department saw calls for service increase and plateau through the current. What has bolstered those calls for service were reports of people not wearing masks at businesses and reporting businesses that may have been operating outside of state or local guidelines. Based on the nature of the call, police officers like Brickley could be called on to mediate. The Sonora Police Department and city officials have maintained a policy of education instead of criminal enforcement. Citations and possible fines can be levied directly through the city following investigation by a county COVID-19 task force. Brickley and other officers have also had to take someone into custody who professed to have COVID-19 or be in quarantine. “We try to be professional, keep ourselves safe and that person safe,” he said. “We still had to take care of business and handle our calls and roll with the punches as they come” Moving forward, Brickley said he hopes to promote proactive and community-oriented policing, a philosophy of law enforcement that involves talking to the public and representing the ethics of fair and honest police officers. “Seeing the community support behind us throughout all of this really reassured our minds why we're doing this,” he said. “We're doing this for the community and not for ourselves.” Contact Giuseppe Ricapito at gricapito@uniondemocrat.net or (209) 588-4526.